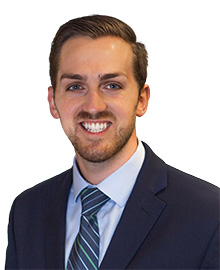 His hobbies include basketball, hiking, bowling, disc golf, and spending time with his wife, children, and dog.